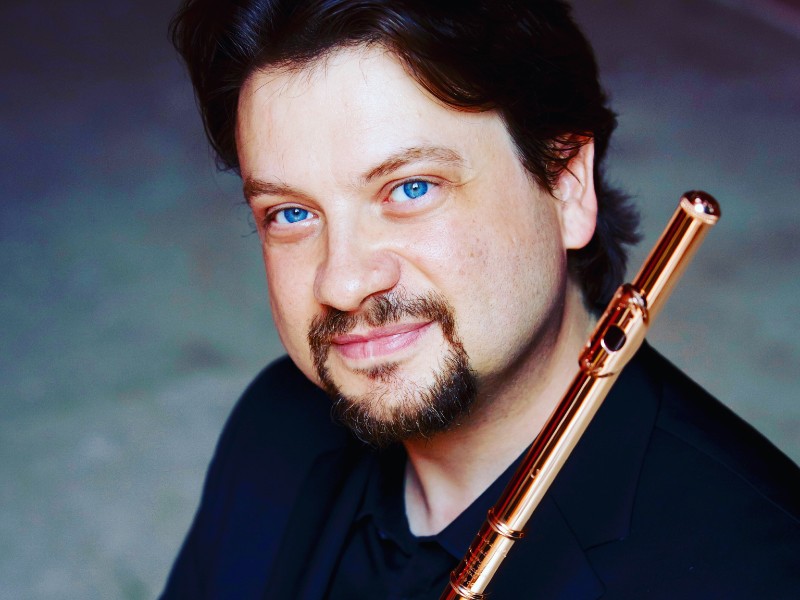 “Andrea Oliva is one of the best flute players of his generation, a shining star in the flute world”, as quoted by Sir James Galway. Andrea has been Principal Solo Flute with the Orchestra Nazionale dell’ Accademia di Santa Cecilia since 2003. Before that, he was a member of the Gustav Mahler Jugendorchester and the Herbert von Karajan Academy, where he worked with prestigious conductors including, Claudio Abbado, Seiji Ozawa and Pierre Boulez. Aged 23, he was invited by the Berliner Philharmoniker as Guest Principal Flute, under the baton of Claudio Abbado, Bernard Haitink, Valery Gerghiev, Maris Jansons, and Lorin Maazel.
Born in Modena in 1977, Andrea graduated from Conservatorio Vecchi-Tonelli in Modena-Carpi with full marks, under the mentorship of Gabriele Betti. He continued his studies with Claudio Montafia, Michele Marasco, Glauco Cambursano, Jean Claude Gérard, Michael Hasel, Andreas Blau, and Sir James Galway.
Winner of several international flute competitions, Andrea was awarded First Prize at the Kobe International Flute Competition (2005) and Third Prize at the ARD International Music Competition in Munich (2004). Furthermore, he has given concerts at some of the most prestigious halls worldwide: Carnegie Hall – New York, the Tate Modern with HM Queen Elizabeth II in attendance, Wigmore Hall, Berliner Philharmonie, KKL Luzern, Palau de la Música de València, Hong Kong Academy, Bunka Kaikan Hall Tokyo, together with performances in Malaysia, Taiwan, China, Chile, Canada, Argentina and Cuba.
Invited by Claudio Abbado, he worked with the Orchestra Mozart of Bologna and was a tutor at its academy. As a principal flute, Andrea regularly performs with Bayerische Rundfunk, Bamberger Symphoniker, NDR Hamburg, Human Rights Orchestra, Mahler Chamber Orchestra and Chamber Orchestra of Europe. As a soloist he has performed numerous times with the Orchestra dell’Accademia Nazionale di Santa Cecilia, led by Christopher Hogwood, Myung-whun Chung and Antonio Pappano. In 2012 Andrea premiered in Rome, at the Concerto for Flute and Orchestra by French composer Marc-André Dalbavie, under the baton of Manfred Honeck.
A passionate chamber musician, he is the founding member of Quintetto di fiati di S. Cecilia e Concertgebouw and I Cameristi di Santa Cecilia, with which he regularly gives concerts throughout Europe.
In high demand as teacher and tutor, Andrea Oliva holds the title of professor at the University of Music at Conservatorio della Svizzera Italiana (CSI Lugano). Since 2019, he has been a visiting professor at the Royal Northern College of Music, Manchester. In Italy he tutors at Alto Perfezionamento I Fiati at the Accademia Nazionale di Santa Cecilia in Rome, Conservatorio Vecchi-Tonelli in Modena-Carpi and at the Accademia pianistica in Imola. A devoted educator, Andrea conceived, and is Artistic Director of, the International Competition “Gabriele Betti” in Modena and the “Conrad Klemm” Competition in Lugano, both of which support talented young musicians with scholarships.
Andrea boasts a rich discography, including the Bach Flute Sonatas with pianist Angela Hewitt on the “Hyperion” label, which gained him the prestigious Best Itunes 2013 Prize. As a soloist, he has performed the Sonata da Concerto by Giorgio Federico Ghedini, conducted by Daniele Rustioni with Orchestra della Toscana and recorded by “Sony”. Additionally, Andrea records for “Decca”, “Aulicus Classics” and “Da Vinci Records”. His arrangements for flute and ensembles are published by “Da Vinci Edition”.
Always attentive to supporting young people, he is the creator and Artistic Director of the International Competitions for the award of scholarships to young talents “Gabriele Betti” (Modena) and “Conrad Klemm” (Lugano).
Andrea Oliva’s concerts are broadcast globally on Stingray Classic and RAI 5 TV.
www.andreaoliva.com