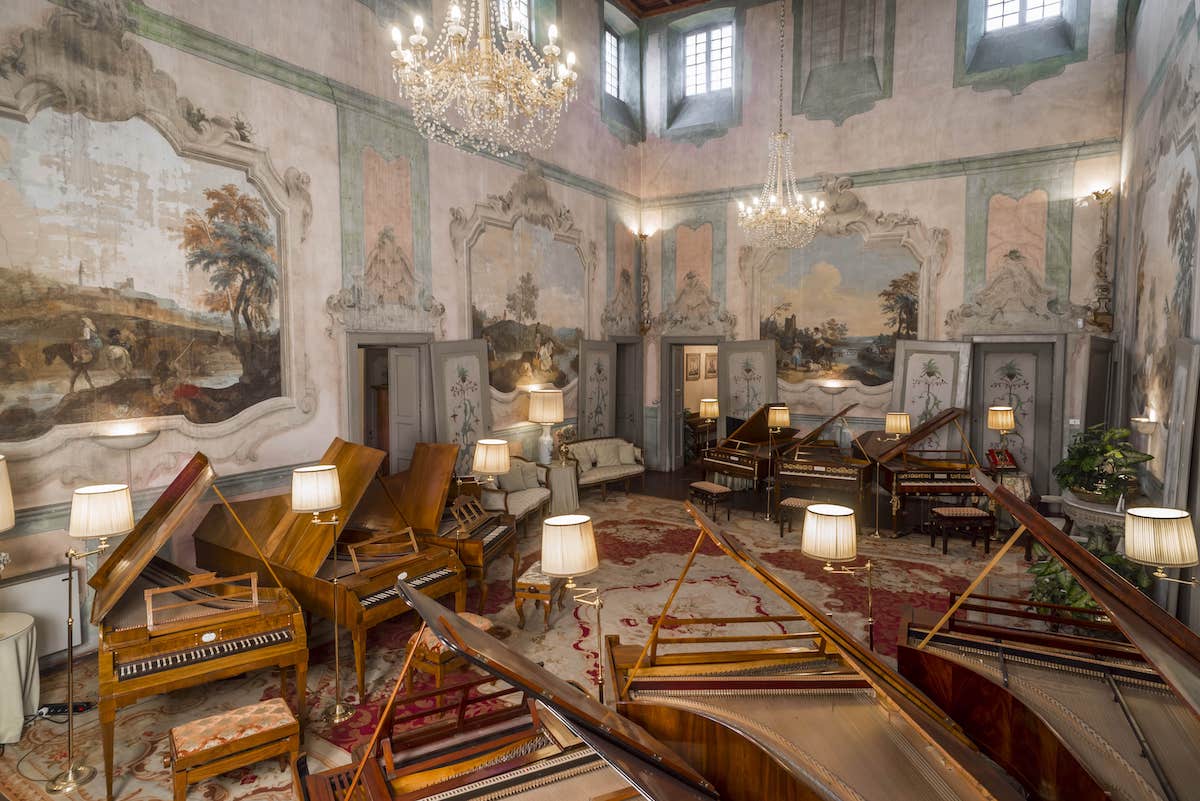 The real experience at Villa Medici Giulini is represented by the encounter with keyboard instruments located in the Villa halls, as if they had always been there. The Villa Empire hall is decorated with two lunettes depicting musical instruments and stands as witness of the habit of listening to concerts, perhaps with the sunset light filtering from the west-facing porch, illuminating the room with the afternoon light.

The hall frescoed by Zuccarelli, in the core of the house, was probably a ballroom or a theatre for baroque operas. Live today, as we used to live in the past, but looking to the future: this is the new and ancient experience that guests can taste in Villa Giulini.

There are museums of musical instruments all over the world and the first question that comes spontaneous to ask is where the difference is and why ever talk about experience. The answer is simple: the instruments in the museums are shown to visitors who certainly cannot play them, for many valid reasons of conservation of goods that belong to institutional owners.

At Villa Giulini instead all the instruments are always ready to be played and their “life” is just this: offering the experience of the original sound that composers listened to when they created their music, whether they were Bach, Scarlatti, Mozart, Chopin, Liszt, Verdi, Debussy, Prokofiev and so on. In search of lost sounds is the title of this journey through time.

There is always a connection between the composer and his instrument, as if the quality of sound could inspire the musician and be always closer to his feeling. For the young musicians of today the possibility of playing “the composition instruments” is an exciting journey from which derives an artistic growth allowing an improvement in modern instruments performances.

This is how the combinations of instruments and composers were born: Anton Walter and Mozart, Pleyel and Chopin, Verdi and Wagner with Erard, Bluthner and Debussy. Books published by Villa Medici Giulini tell this story as a fairy tale. The title of the series In Search of Lost Sounds shows by itself an infinite search.

Fernanda Giulini tells “it’s a collection born almost for play and, like all things done having fun, it has become a real collection, which is never over because every new instrument is an adventure. If I had to write a book, I would call it The secret adventures of a collector. It could be a cheerful narration, full of stories and incredible fairy tales that are hidden behind every new acquisition. There is one question I never want to answer to and it is this: “How many instruments does your collection include?” I do not know and I do not even want to know because to become aware of it would mean to get out of the dream and face reality. One instrument is in restoration, another must be tuned, the third is playing in a concert, the fourth is in an exhibition; they are “wanderers” like travelers, because a collection is something alive, in perpetual movement. The instruments are very different from the paintings, it is as if they had their own personality and independence. They are played and then return to their home, where you can always listen to them. They were born for very similar places and perhaps for this reason they well live in the rooms where they are kept, in optimal conditions of conservation. Maybe there are ghosts in Briosco, but they are certainly happy ghosts who love music and theatre passionately. I would like to reveal another secret: I always play the instruments with a continuous comparison between the historical instrument where the music was composed and the modern instrument, being it a Steinway or a Yamaha. I was fortunate enough to conclude the piano study with a glorious diploma at the Conservatorio Giuseppe Verdi in Milan, under the guidance of Bruno Canino. I am happy to offer other people a journey into music and the comparison between the instruments of the past, those of today and, why not, the electronic instruments of the future; because music knows no boundaries and a Verdi aria can become a movie soundtrack music, as happened with the Waltz of Gattopardo, written by Verdi, revised by Rota and immortalized by Visconti”.

The itinerant concert in Villa Giulini halls begins with the instruments of the eighteenth century and ends on the Steinway in the Teatrino in a musical journey that represents a unique experience mixing the architectural harmony of the place with the beauty of acoustics in an enchanted atmosphere. It recreates the atmosphere of the historic rooms in which the masterpieces of Viennese and French composers were performed for the first time.

A selection of pictures of the Instruments Collection