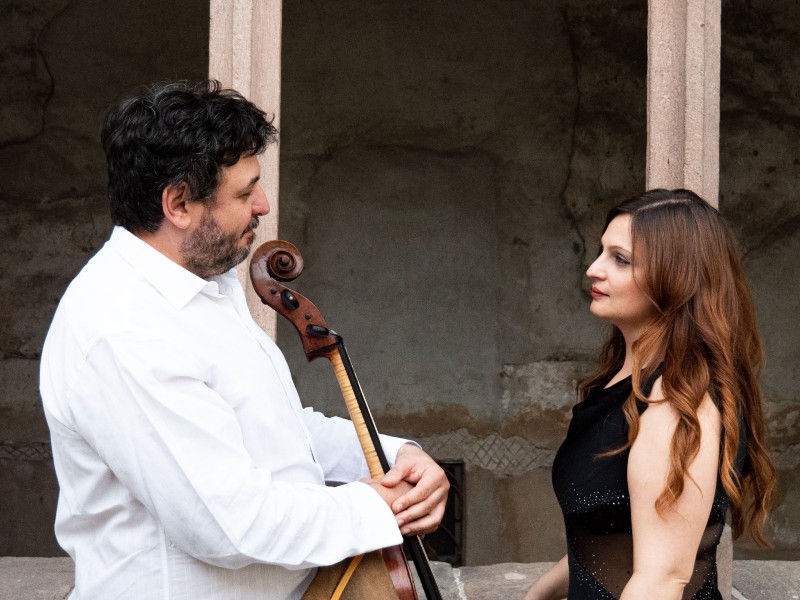 Roberto Trainini was born into a non-musical family in a deep south-Italian town. He began his studies at the age of 10 when his father’s uncle Saverio Loiacono (who was a principal cellist in Buenos Aires at the Teatro Colon) returned from South America and asked if Roberto would like to try to play the cello. Since then the cello has never left his side. At first, Roberto studied with Vincenzo Caminiti and Pietro Bruno in Bari; and was awarded first-prize at the two major national youth cello competitions in Italy. It was at the age of 19 that Radu Aldulescu listened to his playing and took him into his class, with a full scholarship, at the International Menuhin Music Academy in Switzerland; there he had the possibility of studying chamber music with Lord Yehudi Menuhin and Walter Levin, as well. Subsequently, he went on to study cello and chamber music with Michel Strauss, Steven Isserlis and Niklas Schmidt; but the biggest influence remains that of his teacher and mentor in Hamburg: Wolfgang Mehlhorn. He was awarded several prizes at important international Cello Competitions (Markneukirchen, Belgrad, Rome, Hamburg, amongst others) and was a principal cellist at the Lüneburg Opera and the SSO Singapore. Then, his solo career took off with his debut in Iasi (Romania) performing the Dvorak Cello Concerto under the baton of Michele Santorsola. He is, nowadays, a sought after soloist in Poland, Germany, Austria, Turkey, South Africa, Romania, Cyprus, Italy, China, Japan, Mexico and Argentina. Co-founder of the Hamburger Streichsextett, Roberto was a permanent member of the Salzburger Solisten; a chamber music group that performs worldwide. A passion of his is the re-discovery of the Italian Solo Repertoire of the XX Century (together with M. Santorsola); the Castelnuovo-Tedesco Cello Concerto is a part of this project which also includes Respighi, Casella, Ghedini, and Malipiero. Furthermore, he studied and performed Sofia Gubaidulina’s “Canticle of the Sun” with the composer herself in Germany; and was awarded in 2012 the Premio Cartagine per la Musica in Rome.Roberto is currently a Cello Professor at the Claudio Monteverdi Conservatory in Bolzano, Italy, as well as at the Academia de Arte de Florencia in Mexico City and an invited guest Professor at the Radom College of Music. He regularly holds Masterclasses in Poland, Mexico, Italy, Spain, Ukraine and Argentina. Since 2014 Roberto is a recording artist for Brilliant Classics; his highly acclaimed recording of Giuseppe Martucci’s Cello Sonatas and Pieces with Massimiliano Ferrati was the first of a series of cello and piano releases. In 2016 the Cesar Franck A major Sonata and Beethoven’s Kreutzer Sonata, in duo with Cristiano Burato, was be released. In 2021/2022 will be released a Recording with the pianist Stella Pontoriero for The italian Label Tactus, comprising Casella’s first sonata, Respighi variations and other italian music. Since 2012 he is a Professor of violoncello at the Hochschule Für Musik Bozen and since 2015 he is also a Professor of violoncello at the Academia de Arte de Florencia. Additionally, he is currently recording the Complete Bach Cello Suites, as well as his own transcription of the Chaconne from Bach’s second violin partita for Aevea/OnClassical. Roberto performs on two cellos made specially for him by Alessandro Ciciliati in 2009 and 2014, and occasionally on the “Ex-Vatican” Stradivarius, kindly loaned to him by the Academia de Arte de Florencia.