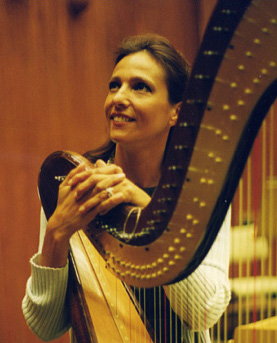 Anna Loro and Andrea Oliva are holding on the same days – from 16 to 18 June – a masterclass which in which the two artists will teach separately on Thursday 16th and Friday 17th June, while on Sunday 18th June they will hold chamber music lessons together. The masterclass will end with the final concert at 5.30 pm in the Teatrino of Villa Medici Giulini.

Every summer she organize a masterclass in Castello di Padernello near Brescia.

In 2017 Anna Loro and Andrea Oliva recorder for Da Vinci a cd “Un reve long dex sierles” where they performed music from the French Impressionism. In the same year she recorded with Gianpaolo Pretto a cd with music by C. Debussy.

In 2021 she performed live Mozart Concerto for flute and harp with Orchestra Haydn In Trento with Francesco Dainese conducted by Yves Abel.

Maestro Pierre Jamet wrote about her: “…a great artist able to deeply touch the audience thanks to the fascination that comes from her sound and her musical interpretation… a rare powerful touch joined with a secure technique… one of the greatest proponent of the Italian harpists”.